You are here: Home / Big Cats / The Sad Tale of the Smilodon

Who mourns the passing of the Smilodon? He was another feisty carnivore lost when people began to take over the world

Smilodon became extinct around 10,000 BCE, when so many other large herbivorous and carnivorous mammals went under the axe.

Today we know of Smilodon only from his fossil remains which are found all over North America, especially in the La Brea tar pits.

Once again, humans are responsible

When people crossed the ice bridge over Bering Strait into North America at the end of the last Ice Age, they traveled right to the tip of South America and caused wholesale extinctions of species along the way.

Everyone remembers the saber tooth cats for their teeth but they were simple, social creatures who lived and hunted like lions today. Friendly, family animals who just happened to have enormous, frightening, deadly-sharp canines. 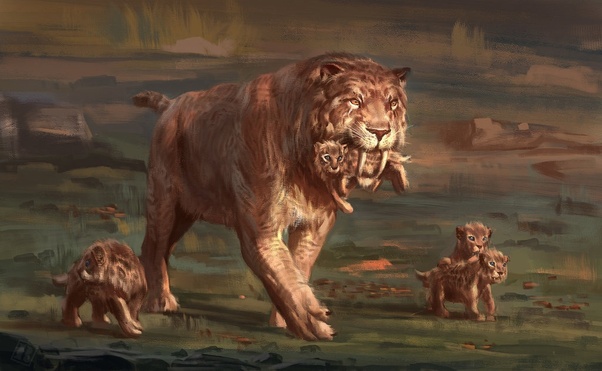 Ferocious predators indeed – but no match at all for the deadly humans.

Smilodon Fatalis – What a name!

You can see by the reconstruction below that the Smilodon was a handsome animal. 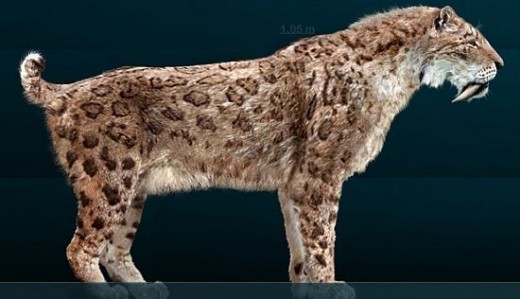 Although commonly called the “saber-toothed tiger,” the Smilodon is part of a different subfamily and not closely related to the tiger at all. (It seems a shame to discard the glamour of the name). However, he was large and superbly muscular, and pretty much the same size of a modern-day tiger.

The idea of linking a Smilodon with a tiger gives the impression of a striped coat. But colouring depends on environment. Stripes are good news only in wooded areas where they would serve as efficient camouflage. In open grassland areas, any cat needs a solid tawny brown, like lions, a shade which blends into grasslands.

The stripe patterns on Smilodon were perhaps not as bold as a tiger, since in most cases they appear to have lived in less densely forested areas and not in a jungle. A wider or more spot or ‘smudge’ pattern would have been more adaptive, as it is in cheetahs and leopards.

Although the Smilodon has no close living relatives, we can reconstruct how this cat looked by comparing its bones with those of large cats living today. Very powerful front legs and a short tail show that these cats used stealth and ambush rather than speed to capture prey.

I prefer this method myself, it takes cunning, forward planning and great patience to lie in ambush rather than hurtling off after a running victim. The Smilodon would have used its long canines to chomp into a jugular or bite open a soft belly. 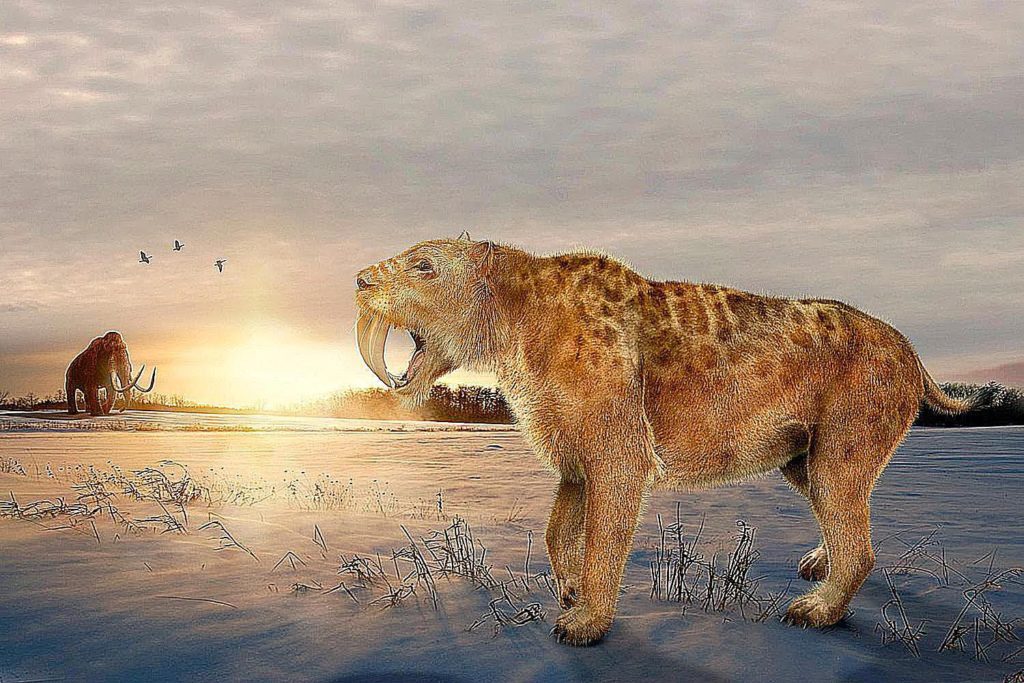 Smilodon bit into prey that was struggling wildly — as can a lion — it would have risked serious injury and perhaps even breakage of its own skull and teeth. He could only have bitten prey that had been pinned down first, and here’s the real source of the might of the saber-tooth..

His body was immensely powerful, more bear-like than cat-like. Huge forearms were equipped with large dew-claws on the thumbs that would have acted like grappling hooks, allowing it to grip and wrestle even bison-sized animals to the ground with relative ease.

From that position, Smilodon used its knife-like teeth for the coup de grace, piercing deeply into the prey’s neck. The tooth function was to open deep wounds in vulnerable soft tissue — most likely the windpipe or major blood vessels of the neck.

This highly refined killing style may have contributed to Smilodon’s extinction. Although superbly adapted to taking big prey, he was massively over-engineered for a life subsisting on medium-sized or small animals.

Exactly what reduced the number of big prey is open for debate, but I suspect the arrival of humans played a major role.

When Mittens the Tuxedo … END_OF_DOCUMENT_TOKEN_TO_BE_REPLACED